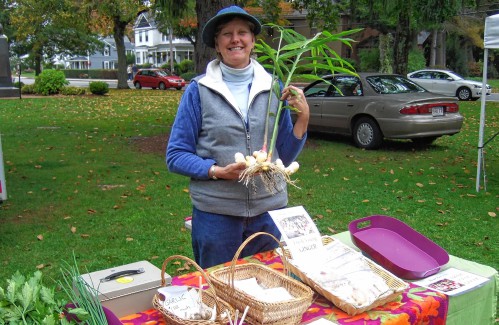 Flourish Farm, a one-man business owned by Linda Fuchs, is a small farm with an oversized impact. Fuchs grows specialty crops on “half an acre of sunshine” in Brimfield, while working hard to maintain access and knowledge about healthy foods.

Like many local farmers, Fuchs’ ties to agriculture run deep.

“My grandfather immigrated from Lithuania and settled on what became the family farm in Spencer, Massachusetts. I grew up on that same farm, ”she says, surrounded by her father’s large vegetable garden, flowers and food preservation projects from her mother, and other parents who continued to run the family dairy farm for more than 50 years. decades.

Prior to founding Flourish Farm, Fuchs attended the Stockbridge School of Agriculture at UMass Amherst and had a varied career in landscaping, managing greenhouses and nurseries, developing school gardens, and teaching courses in gardening and nature, among others.

For Fuchs, these experiences sparked a passion for “educating people about plants and their connection to human health”. In the years that followed, she carried that enthusiasm to two projects that go hand in hand: Flourish Farm, which she founded in 2004, and Brimfield Farmers Market, which she led in 2007.

Since then, Fuchs’ goal has been “to teach people how food grows, to help them grow it, and to highlight how food is a catalyst for our health,” she says.

It starts with what she grows at Flourish Farm and guides how she connects the farm to the community at large. From the start, Fuchs has used its expertise in nursery cultivation to increase vegetable start-ups, and these remain a key offering.

“I mainly grow things that are difficult to start on my own,” she says, “and I sell many varieties, all as individual plants.”

Fuchs’ analogy is that where others sell full starter platters (“candy bars”), she sells at the factory (“penny candy”), allowing customers to try multiple varieties while buying exactly. what they need. This caters well to new gardeners and those who plant in small spaces, two audiences she hopes to help grow more of their own food.

Where some farms only sell in the spring, “I sell from April to October,” explains Fuchs. “A lot of people think you plant a garden in June and you’re done. “

But there are many varieties that can be planted over and over again, especially fast-growing crops such as green vegetables. Flourish Farm offers different varieties adapted to the weather conditions of each season, including lettuce starting to sell now.

The rest of Flourish Farm’s main crops – ginger, turmeric, garlic, figs and now microgreens – are a nod to maximizing yield in small spaces, supporting a healthier community, and growing things which are not widely available in the region.

“The reason I started growing ginger in 2010 and then turmeric is because of their health benefits,” says Fuchs, noting their anti-inflammatory properties and the particular power of ginger in the plant. fight against winter colds. “Garlic,” she adds, “is both antibacterial and antifungal, especially when eaten raw,” perhaps chopped in a salad dressing or incorporated into salsa or pesto. Microgreens are very nutrient dense, while a single fig tree adds a touch of sweetness with its late summer bounty.

Fuchs sees Flourish as an educational farm, not in a traditional course-based sense, but rather in the way she approaches her community’s connection to what she does. And by selling primarily at farmers’ markets, she can talk to customers about what she grows and how it might fit into their lives.

This is how the Brimfield Farmers Market goes down in history. Fuchs initiated it in 2007 with its host site, the Hitchcock Free Academy, and continues to operate it today. Farmers’ markets come in all forms, but from the start, Fuchs has been clear on the priority of his market.

“We are here to provide food for our city,” she said. “We don’t have a grocery store in Brimfield, and six surrounding towns don’t either. Our situation is the reason farmers’ markets should exist. Not as a luxury, but as a common resource.

The market is now cemented as a key food access point in the region, particularly as a location for those receiving food assistance like SNAP (the Supplemental Nutrition Access Program), HIP (the Supplemental Nutrition Access Program) state health incentive that further extends SNAP dollars if spent on local produce) and farmer’s market coupons for the elderly and women, infants and children (WICs).

But last year, Fuchs witnessed how fragile this hotspot was, as COVID threatened the normal functions of many local farmers’ markets. This encouraged her to look for other ways to market her crops, and she ended up getting a subsidy for the state’s food security infrastructure. Among other things, this funded key equipment for an on-site farm stand.

“Now I have a fridge on the farm, on my porch, and people can buy self-service things with cash or a card, Tuesday through Sunday, even though I’m not there,” she says. “But I’m still here on Fridays 10:30 am to 6:00 pm to accept SNAP, HIP, WIC and senior coupons.”

Jacob Nelson is Communications Coordinator for CISA (Community Involved in Sustaining Agriculture). To see what’s in season and find out more about local farms and farmers’ markets near you, visit buylocalfood.org.