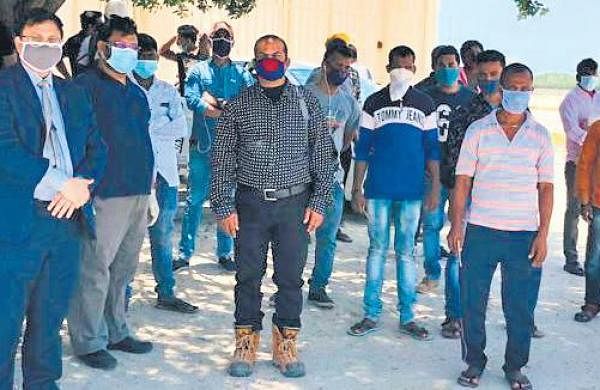 BHUBANEWAR: When Jitu Swain reportedly ended his life in a labor camp in Bahrain on August 16, his parents in the isolated village of Khandigaon in the Ganjam district here had neither the funds nor the resources to recover his remains from the area. foreign land.

Without Bahraini founder Odia Samaj Arun Kumar Praharaj, the elderly couple would never have been able to see their son for the last time.

Not only did he facilitate the autopsy, but he also made arrangements to repatriate the body to Bhubaneswar and then to Swain’s homeland on August 28.

The 27-year-old hanged himself to death due to financial difficulties. While the company has already paid its dues and other regulations, Praharaj is now working to secure an ex-gratia for the parents of the deceased.

Only 24 hours before Swain’s death, Praharaj had repatriated the body of another worker from Ganjam Simanchala Rout from Bahrain to Odisha. Rout had suffered a stroke and was on treatment for 21 days before dying on August 8.

For many anonymous Odia workers struggling to make a living on the deserted Middle Eastern island of Bahrain, Praharaj has become their go-to person in times of crisis. Since the Covid-19 epidemic, Praharaj – the CEO of the Dadabhai group in Bahrain – has been offering altruistic services to his fellow Indians, Odias in particular.

Whether it is saving stranded workers, providing them with financial and legal aid or repatriating bodies to Odisha.

“Here in Bahrain, the poor workers in Odisha or elsewhere in any part of India have no one to turn to or ask for help in an emergency. This situation worsened when the Covid-19 struck, ”explains Praharaj, who has been working for two decades for the socio-economic and health security of migrant workers residing in the Gulf country.

During the Covid-19 closures, he not only facilitated the return of more than 350 Odia workers from Bahrain to Odisha by direct flights, but also paid for the tickets of more than 25 of these poor workers and organized food supplies for workers stranded in labor camps.

In addition, with the help of volunteers from the community of Odia, he created a database to facilitate the registration by embassies of distant migrants.

He also advocates for migrant workers with the Indian government on a regular basis.

“The state and the Center need to take many steps to ensure social security and labor rights for the working poor who come to the Gulf to work. For starters, they can form a state-level NRI cell to create a database of non-resident Odias and appoint coordinators in each country to help the community when needed, ”says the Mayurbhanj-born philanthropist.

Man with a “green thumb”

Besides helping Odias and promoting Odia culture in the Middle East, Praharaj is a passionate and passionate gardener.

Its garden of over 25,000 square feet of desert land boasts flowers, fruits and vegetables in season.

While some regulars in his garden are blackberry, banana, pomegranate and Chiku plants, the man with the “green thumb” was also able to grow strawberries and Bael Indian plants.

“I started this garden by mixing desert sand with Indian soil and have fed it for 20 years with organic vermicompost that I make from plant waste, dry leaves and grass,” explains Praharaj.

He also raised awareness of the health benefits of the Sajana (drumstick leaves) saga in Bahrain and distributed young shoots of the plant free of charge throughout the kingdom.

“It was actually my father, the late Dr. Trailokyanath Praharaj, who had a green thumb. His passion for plants pushed me towards gardening, ”he says.

From rescuing stranded Odia workers to protecting their welfare in the Gulf of Bahrain, philanthropist, non-resident entrepreneur Odia Arun Praharaj has been the savior of countless hapless expats for over two decades now. Diana Sahu retraces her journey