Australian architecture studio BKK Architects has created Keep House, a house in Melbourne that plays with levels of privacy to stay connected to nature but separate from the nearby public park.

The home, which was designed for a couple and their teenage children, sits on a wedge-shaped lot next to a suburban park. Named after a castle keep, Keep House was designed to provide privacy while taking advantage of the view of the nature that surrounds the site.

“It’s a really unusual site which may seem quite exposed but we also wanted to take advantage of it,” BKK Architects Principal Simon Knott told Dezeen.

“We talked a lot about the idea of ​​protective space,” he continued. “When you’re as exposed as this house, it’s important to have that protective barrier.”

Raised slightly above street level for privacy, the house is formed by three wings arranged in an angular C formation surrounding a courtyard of native garden. This form provides a barrier between the house and the park while ensuring that most spaces are connected to an outdoor space.

A concrete-clad exterior wall separates the house from the public lot, while a concrete chimney that tapers towards its top adds extra height to the structure.

The front wing of the house features an open-plan kitchen, living room and dining area. With large windows that overlook the outdoor spaces, the wing sits between the garden and a terrace overlooking the street.

“The kitchen is like the altar in the family home,” Knott said. “The family and their guests spend a lot of time around the kitchen island. The wooden ceiling gives a warm feeling.”

One of the main features of the room is the dining table, which was made from wood sourced from an oak tree on the corner of the site.

“There was an oak tree around the corner from the site,” Knott said. “As it can be quite an invasive species in Australia and it wasn’t in the best condition, we decided to cull it and the owner used it to make a table for the kitchen. “

A storage room and a pantry can be found next to the kitchen, while an office is located next to it. A slight change in floor level marks the transition to the office, a choice that helps separate work from home.

Two bathrooms are in the hallway between the two wings, which leads to a circulation area with a staircase connecting the ground floor to the master bedroom on the upper floor. 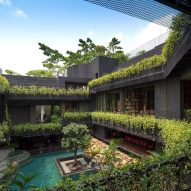 Five houses where the courtyard is the heart of the house

A wing for teenagers is on the other side of the staircase, comprising two bedrooms, a bathroom and a space with a large screen to relax or play.

“There’s a bit of separation and it’s really important that both boys have their own space,” Knott commented.

“It’s been really interesting given the lockdown we’ve had here in Australia, spending months at a time at home, having a house where you can get together but also having that time apart has become really important.”

The other side of the ground floor includes service areas and a guest bedroom.

The upper floor contains the master bedroom with access to a private terrace which overlooks a nearby park and has become a relaxing space for the family.

The C-shaped house folds around a garden courtyard filled with plants native to Victoria. Verandas line the courtyard, blurring the transition between the garden and the interior and providing shade for the house.

“Shading from the sun here is important, and shading along the perimeter of the house acts as a veranda,” Knott said. “It also becomes this transitional space between the house and the outdoor spaces.”

An additional small triangular garden is formed where the leaning building meets the site boundary.

“There is a transition of privacy through the varied landscape areas: the visible lawn and vegetable patch in front, the native garden courtyard, the rear triangle accessible from the media area, which is fenced on all sides “said the studio.

“Keep House shows how architecture can explore nuances of intimacy between what is totally interior and what is willingly revealed to passers-by,” the studio commented. “It is designed for a family that needs spaces to come together and spaces to separate.”

Other projects by BKK Architects include an apartment building in Melbourne with circular windows and a house divided into two angular structures.

The photograph is from Tom Blachford.