NEW YEAR IS A TIME OF NEW BEGINNINGS and is filled with many rituals, such as eating black-eyed peas or opening doors and windows on New Years Day.

In some cultures it is customary to give a gift, which is often a plant. One of the best for the New Year is lucky bamboo, which is said to bring luck and prosperity to the recipient.

A money tree is also a good symbol of positive wishes for the New Year.

A basket of herbs with basil, parsley, sage, rosemary, and other greens makes a great gift for someone who loves to cook.

Indoor plants even have health benefits, which can give off oxygen, help purify the air, reduce dust and cigarette smoke, and absorb chemical fumes.

While many people in Southwest Florida focus on their landscaping, there are plenty of houseplants that can bring color and a fresh start feeling to the interior of the home.

â€œIt’s good for your mental and physical health to have live plants in your home,â€ says Geoff Britt. â€œThey add life to your home, you can interact with them and they look great. “

FROM THE LEFT: A palm tree from Madagascar; an aerial peach orchid in bloom; a cinnamon orchid PHOTOS COURTESY OF GEOFF BRITT

Mr Britt loved outdoor gardening when he lived in Michigan, but now he keeps about 25 plants inside his home and several on his condominium balcony, moving some outside in warmer weather. . He works mostly with tropical species that he didn’t have in the north, noting that there are many “exotic things” that thrive in southwest Florida.

It keeps a wide variety of orchids but also has a fern, a Madagascan palm and a small pine. A plumeria from a moving friend didn’t work indoors, and neither did anthurium, despite buying three different plants because he loves them.

He trains a bonsai tree to wrap around a small decorative chair so that it dangles from the branches, and he wraps the stems of his Norfolk pine together to create a trunk. 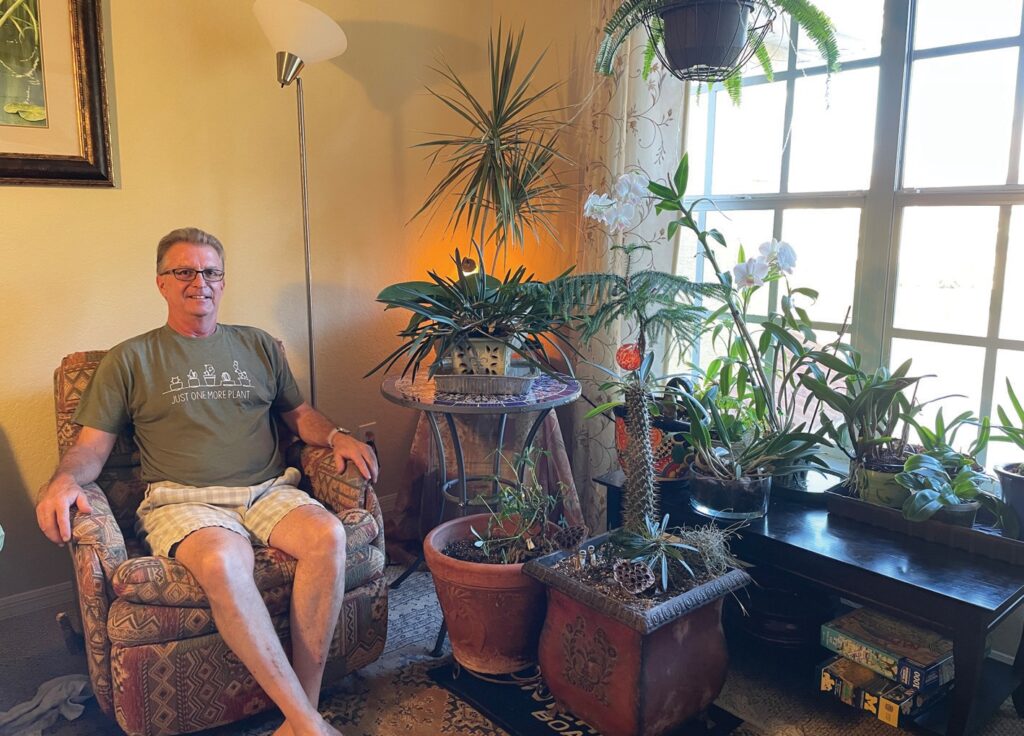 Geoff Britt, wearing his “Just One More Plant” shirt, surrounded by some of his houseplants.

â€œA lot of people just prune the plants and grow them to how they look. I tend to look at a plant like the Norfolk pine and bend its will to my own desires, “he says.” It gives me satisfaction to grow something. “

Many of Mr. Britt’s orchids are placed in water tubs and he keeps a fan on to circulate air around the orchids to remove moisture and try to prevent mold or disease.

Orchids are his favorites, he says, noting that many are fragrant and that something is almost always blooming.

â€œMy Jiminy Cricket orchid is special because it started very small, bloomed a flower three years ago and this year has had over 30 flowers,â€ he says. “It was pretty special.”

Another orchid had 50 flowers and got so heavy that it tipped over.

He spends three to four hours a week watering, fertilizing, and pruning his houseplants. When he spots bugs or eggs, he removes them by hand or uses neem oil or a cotton swab dipped in rubbing alcohol. 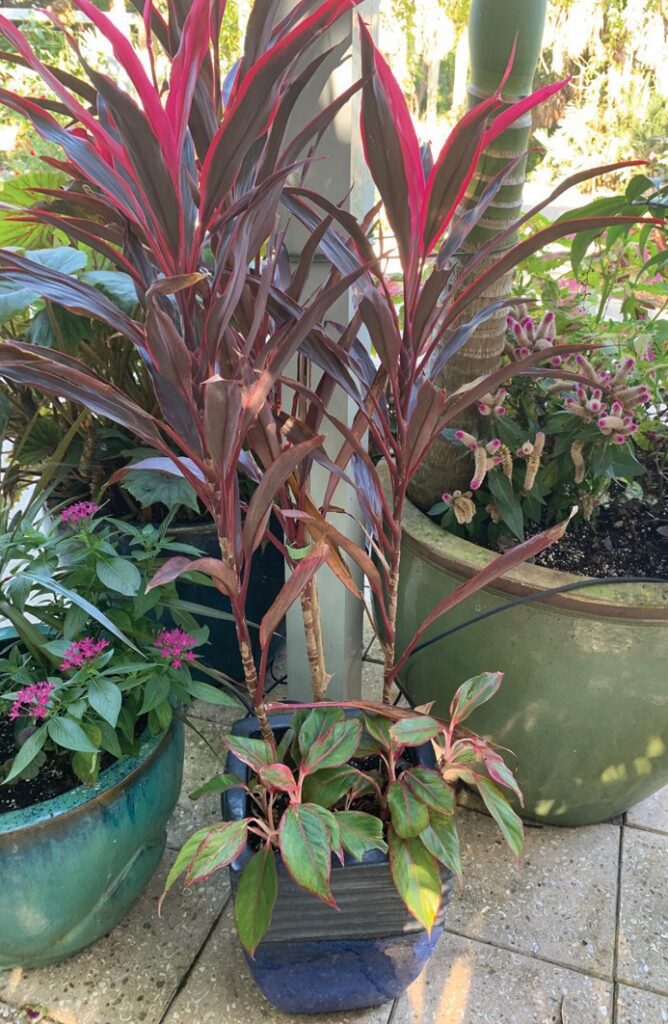 â€œI don’t like using chemicals or insecticides indoors,â€ he says.

Mr Britt buys his plants locally, most notably at the Naples Botanical Garden, where Brian Holley’s curator Liz Chehayl says many plants are very suitable for growing indoors. Here are some of her favorites and what she says about them:

?? African violets – â€œThey are a bit difficult to grow in Florida. Don’t water them too much.

?? Aerial plants – â€œThese are great to have in your bathroom in bright light because they can be passed under the sink every few weeks. “

?? Aloe vera – â€œIt’s very easy to grow and convenient to have for an injury or burn. “

?? Begonias – â€œThere are a lot of begonias that can handle indoor conditions, not just those used as annuals in the north. They are great because they are shareable by taking cuttings. 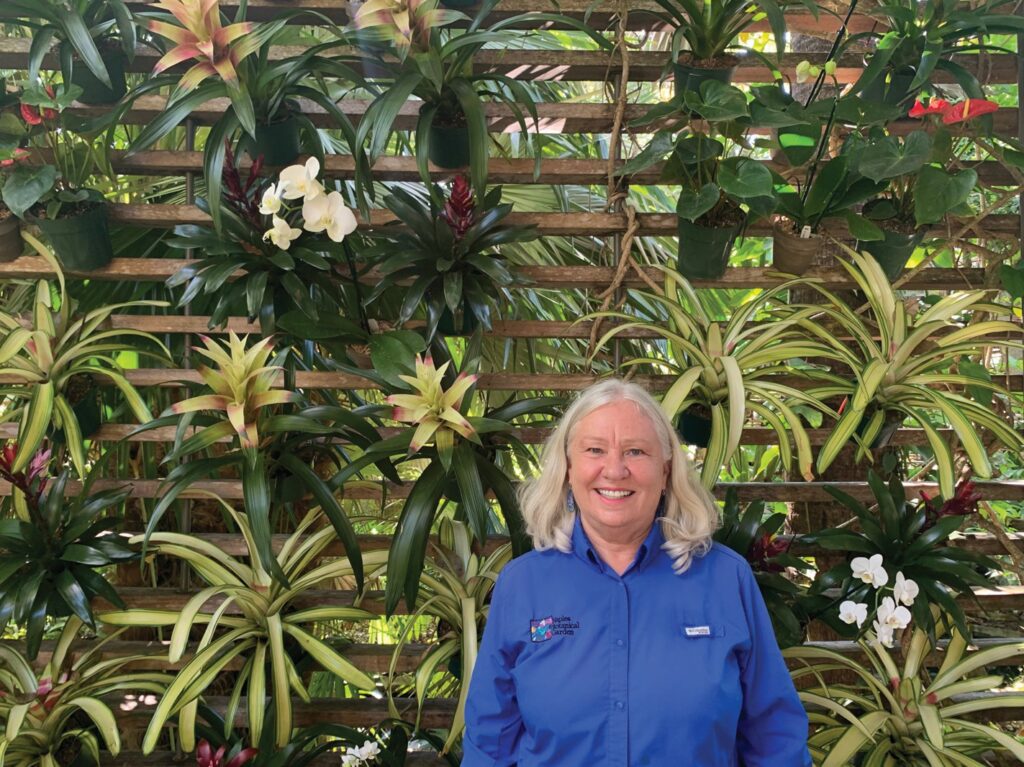 Liz Chehayl stands in front of a wall of bromeliads and orchids at the Botanical Garden in Naples. PHOTOS WITH THE AUTHORIZATION OF THE BOTANICAL GARDEN OF NAPLES

?? Bonsai – â€œIt’s good if you want a plant that you will spend a lot of time with. Unless you prune it properly, you will send a big plant.

?? Bromeliad – â€œThey are perfect indoors and look so tropical. All you have to do is keep the indoor cut of the plant watered.

?? Cactus – â€œThey are easy to grow indoors or outdoors. They must have good drainage.

?? Christmas cactus – â€œIt is a plant that flowers reliably at Christmas. Do not water it too much.

?? Dieffenbachia – â€œThe oldest plant I have is a dieffenbachia that I found for decades in the basement of my first house. It was just a stick. I started to water it and I still have it. They have a lot of energy in their stems. 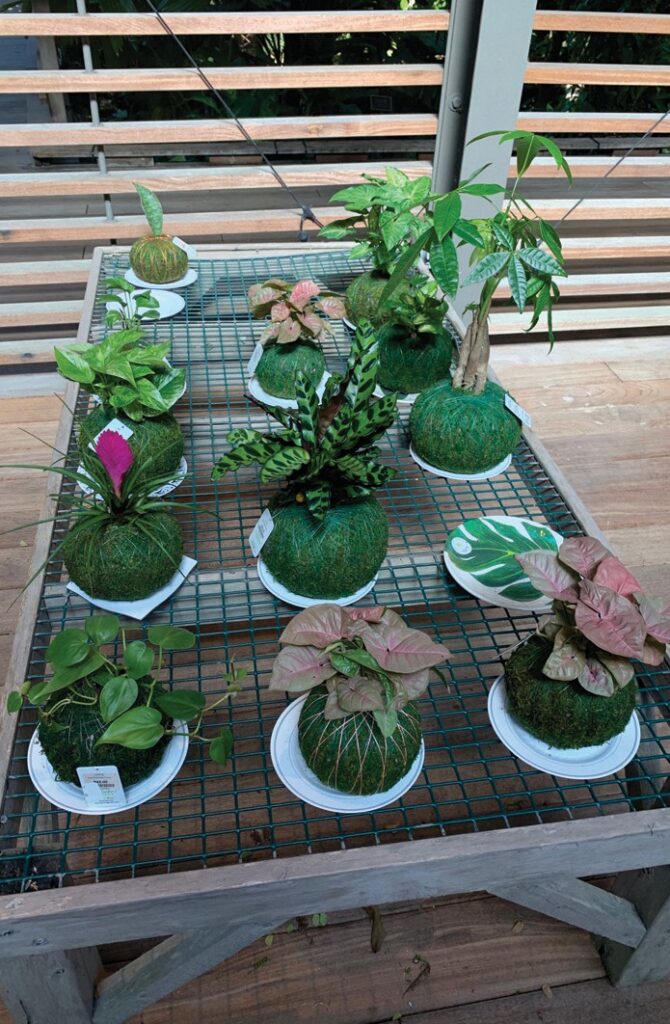 A selection of plants presented as Kokedama

?? Leg ferns – â€œI love legged ferns. They can take over a pot and look really good. The stems hang down and you almost end up with a plant ball. It will completely cover the pot.

?? Golden Pothos – â€œThis is a really interesting short vine plant. The surprising part is that if you put it outside and let it grow and climb something, the leaves on the ground which are about 3-4 inches long will become over a foot wide because they have a growing pattern. different on the ground than when climbing. It can also take root indoors if you put it in a pot and let it hang on to something.

?? Heart-leaved philodendron – â€œThey will grow up forever. It is a vine which continues as a vine.

?? Hoya – â€œThere are a lot of different types. Kerrii is heart-shaped and very popular on Valentine’s Day.

?? Small violin – â€œIt has a pretty sheet in the shape of a violin. You need to get used to the fact that you will have a taller plant that is about 4 to 6 feet tall. Put it in the corner of a room and keep it trimmed.

?? Orchids – â€œMoth orchids are a very common gift because they don’t need a lot of light, are watered only once a week, and can flower for several months. Most people have heard the advice to put ice cubes in these orchids, but it is not a good idea. They are tropical plants and do not like to be cold. Just sprinkle them in your sink and let them drain. The worst thing you can do is make them too wet. Don’t kill them with kindness.

?? Peace Lily – “They are different sizes and have beautiful white flowers.”

?? Spider plant – “It’s fun because it sends stems with new plants at the end that you can cut and pass on to a friend. “

?? Swedish ivy – “She is very easy to grow but does not have flowers. You appreciate it for the beauty of its leaves.

?? Triostar Stromanthe – â€œYou grow it for the three different colors of its leaves: white, green and red. “

?? Plant ZZ – â€œIt’s probably the easiest plant in the worldâ€¦ If you want a plant that you don’t have to take care of a lot, that’s it. It is also very pretty. It is cultivated for its foliage, which is a very bright green. ??