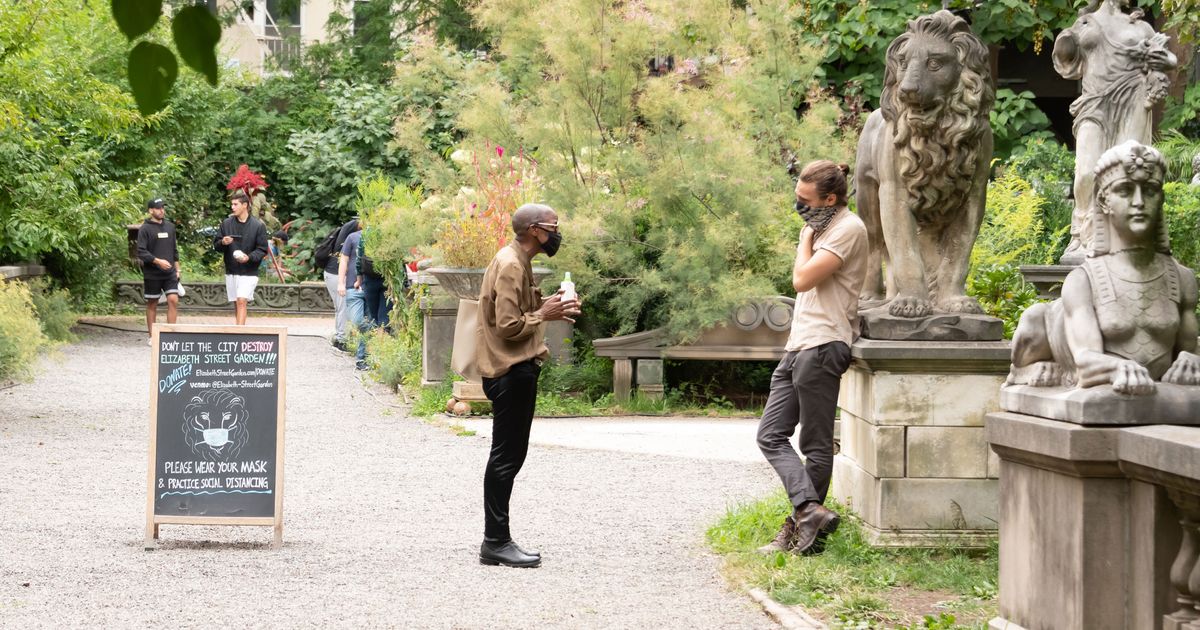 Last week the city issued an eviction notice at the Elizabeth Street Garden. Its caretakers, who have fought for years against a development of affordable housing for low-income seniors that would occupy the site, have been ordered to vacate the site by October 31. As soon as the news broke, they rose up again to save the institution of Little Italy, which has existed since since 1991, when an antique dealer with a nearby store began renting out the town’s overgrown land to use as an outdoor showroom, filling it with architectural relics and adding landscaping. News of the eviction coincided with a climate change rally in the garden over the weekend, and celebrities showed up among supporters, with Patti Smith giving the Bowery Boogie described as “an uplifting performance” of “People Have The Power”. The next day, Norman Siegel, the attorney representing the garden and former executive director of the New York Civil Liberties Union, echoed Smith, using the phrase “power to the people.” But which people have the power? And the power to do what, exactly? To prevent the city from building affordable housing on land it owns?

The stalemate dates back to 2012, when the city first moved to end its month-to-month lease with Allan Reiver, the antique dealer. Reiver, who died in May, was known as a “cantankerous guard of the park,” according to the New York Times, “Decide who had access through their adjoining store, Elizabeth Street Gallery. (Her son, Joseph Reiver, executive director of the nonprofit overseeing the garden, continues the fight.) After City Councilor Margaret Chin pushed the city to build affordable housing on the site, Reiver trained a non-profit to represent the garden and opened it to more public events, such as poetry readings, concerts and yoga classes. But as Chin pointed out Bordered in 2019, the garden was rarely open to the public until he was threatened with eviction: “Members of Community Board 2 came to my office, sat with me and told me the story of their point of view. One of them said to me: ‘Margaret, yes, it was still locked. But if you go to the gallery, and if the gallery owner likes you, he will let you go to the garden from the back of his building. “

Garden supporters have long argued that the choice between green space and affordable housing was wrong, and that sure they support affordable housing for seniors – it’s just that they wish they were somewhere else. (A prime site is 388 Hudson Street, owned by the Department of Environmental Protection, about a mile away.) More recently, Reiver asked that conversions of office buildings would be a better way to add housing. But the choice is real: the city has a large piece of land in a very expensive and fully gentrified part of town, where there are some 5,000 seniors on waiting lists for affordable housing (city-wide). city, this number is nearly 200,000). Much of the existing affordable housing in SoHo and Little Italy is in older, elevator-free buildings, where older people with reduced mobility are either forced to relocate or retreat relying on others to visit and bring food. The city has already taken all the necessary steps for the new building – a call for proposals was launched in 2016. Green paradise, the planned project for the site, was approved in 2019 and would add 123 studios to very affordable senior housing (for people earning $ 18,774 to $ 37,548 per year). Chin argued that 388 Hudson should not be an alternate site, but rather an additional site. “If we can build affordable housing on this site, we should build it, because the needs are huge. It’s neither. The neighborhood is already planned to get several new public parks, including one adjoining the building at 388 Hudson. There is also a number of other community gardens nearby, including M’Finda Kalunga Community Garden and the Liz Christy Bowery Houston garden.

The loss of a beautiful green space to build this housing is a shame, of course.

But the community garden movement is truly the product of another era in New York City history, when the city and its needs were very different. Gardens have grown as a new solution to the vacant and trash-strewn lots of a depopulated and depopulated New York City of the 1970s. Much, but not all, on city-owned land (there is a patchwork of arrangements and structures), and most are on sites where housing once stood and arguably should be again. (The Elizabeth Street Garden site is part of the imprint of a long-gone public school; most of that land was redeveloped in the 1980s, and what remains was roughly the schoolyard.) This is what the city has always wanted. Like a Times A 2016 article said: “Community gardens on municipal land have never been guaranteed to be permanent. From the start, they were primarily designed as placeholders: gardeners typically contract with the city as stewards, not owners, of dilapidated lots, an arrangement codified in the late 1970s. Elizabeth Street is relatively late in the movement.

It’s unclear whether the city will actually be able to evict Elizabeth Street Garden at the end of the month – its advocates filed a lawsuit in 2019, which is still pending in court. Before I die, Reiver said to Times that “a building will never be demolished for a garden. But if you destroy a garden, it’s gone forever. If the garden prevails in court and is preserved indefinitely, it will mean that the city’s ability to build housing on the land will also be lost, along with the people who would have lived there.