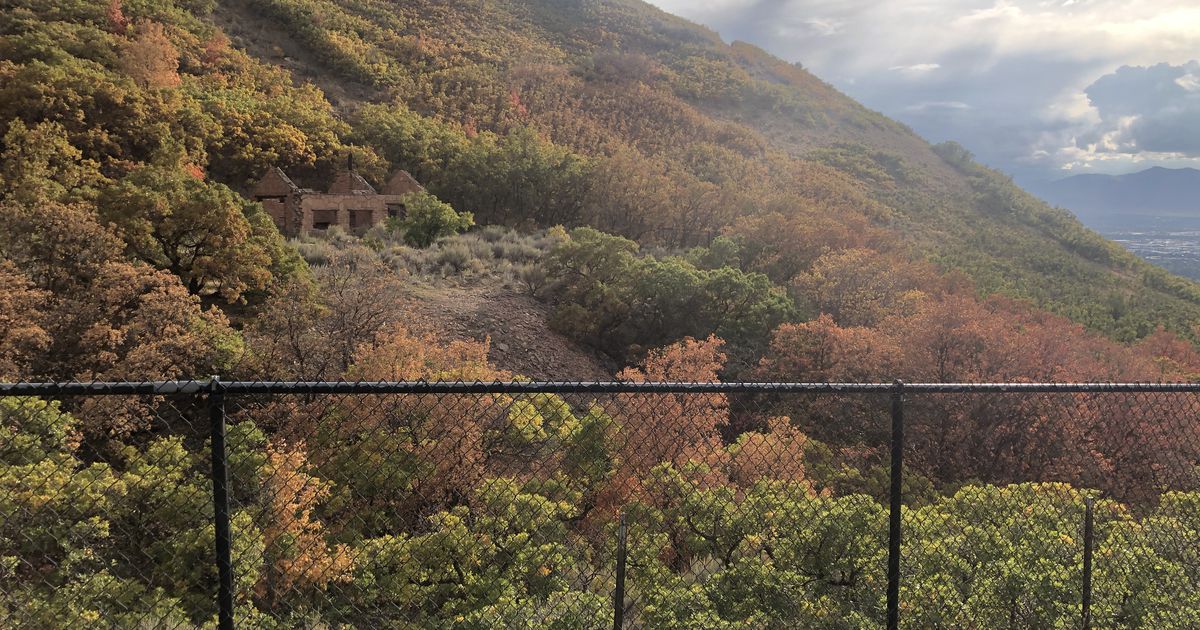 Editor’s Note • This story is only available to Salt Lake Tribune subscribers. Thank you for supporting local journalism.

In the 1980s, a historic stone structure in the foothills behind Red Butte Garden became a popular party spot, where people gathered to enjoy sunsets, beer, and the company of others.

But the garbage and vandalism that accompanied the fun posed a significant challenge for the US Forest Service, which oversees the lands towering above Salt Lake City, so a deal was struck that seemed to offer a lasting solution. Under the deal, the University of Utah extended the botanical garden fence to capture 40 acres of national forest which included what is now called Quarry House or Stone House to ensure its preservation. The classic two-hearth sandstone mansion was built by Utah pioneers in the 1800s.

Although without a roof, the structure is still standing, but there is a new problem that is entirely bureaucratic in nature, according to Bekee Hotze, the Salt Lake City District Ranger for the Uinta-Wasatch-Cache National Forest. Fencing off Forest Service lands is not entirely legal.

Hotze explored ways to deal with the situation with the law. Finding a solution was not easy.

“When we started the discussion of land swaps, the university had just sold a piece of land in Red Butte Canyon to a private family, which the Forest Service just bought,” she wrote in an e- mail “This plot would have been ideal to do a land swap with the University for the plot they fenced off in Red Butte Garden.

The Fenced National Forest is an undeveloped, albeit vital, part of the United States’ signature natural amenity. It now has an extensive network of trails through undulating terrain covered with oak trees with great views over the Salt Lake valley.

This mess caught Hotze’s attention when Red Butte began planning their Six Bridges Trail, nearing completion along Red Butte Creek, which will eventually connect to trails on Forest Service lands. Unless a solution is found, the United States may have to rebuild the fence to exclude federally owned land in the Wasatch foothills, returning the Stone House to Forest Service management.

Now, state trust land officials are to the rescue, coming up with an idea that could put the case to rest and ensure that the Stone House remains inside the United States’ umbrella of protection.

The Utah School and Institutional Trust Lands Administration, or SITLA, has emerged as a potential intermediary.

(Brian Maffly | The Salt Lake Tribune) This part of Red Butte Garden features national forest lands that may have been illegally incorporated into the University of Utah’s signature natural setting.

Here’s how the deal would work, according to Michelle McConkie, SITLA’s deputy surface manager. The agency would trade some of its land with the Forest Service for the 40 acres of national forest and then lease those acres to the United States, which happens to be one of its institutional beneficiaries.

“This proposed exchange is a win-win for all parties. He helps the university, he helps the Forest Service and he allows SITLA to help one of its beneficiaries. If we can help in this situation, we are happy to be involved in doing so, ”said McConkie. “We wouldn’t be doing this if the United States wasn’t one of our beneficiaries.”

SITLA manages 3 million acres of state-owned land for the benefit of public education and several state entities. The agency is legally obligated to manage this land to earn as much money as possible for the Utah Schools Trust Fund.

It contains many patches adjoining the Utah National Forests that are of little use to the school trust, but are perhaps better suited to be included in a national forest where they can be managed for wildlife habitat, the watershed. or recreation.

McConkie said the swap process is just beginning and SITLA has yet to identify a plot it would like to swap with the Forest Service, or assess the Red Butte plot. Trade would have to have value for value to be legal. With its proximity to Utah’s largest city and university, the Red Butte land would likely be worth much more, acre for acre, than any parcel SITLA could offer in exchange.

READ. was unable to make anyone available to comment on this article.

Red Butte Garden occupies over 100 acres on the south side of the mouth of Red Butte Canyon. In the years since the fence was raised, it has become a major cultural attraction in the Wasatch Foothills, with a popular open-air concert hall, botanical research, and educational programming, in addition to its 21 acres of exhibition gardens. Visited by 200,000 per year, it charges $ 14 admission for adults.

READ. established the botanical garden here in the 1980s after the designation of the U. as a State Arboretum, setting aside the land that has become Red Butte Garden & Arboretum.

The arrangement that has led to the current stalemate appears to have been swaddled with good intentions. Vandalism at Stone House was a serious problem, and Red Butte officials provided what at the time seemed an ideal solution.

In the early 1990s, then-district manager Michael Sieg struck a memorandum of understanding with Red Butte manager Mary Pat Matheson, according to Hotze. The garden fence was then enlarged to include the Stone House and National Forest Land that was to be used as an outdoor classroom for Red Butte’s environmental education programs.

“Unfortunately, the District Rangers do not have the authority to authorize an entity to fence off the lands of the National Forest System, charge a fee to enter the land and manage the land,” Hotze said in his email. “Since then, we have researched a number of potential solutions to the problem. “

Hotze investigated whether the federal Small Plots Act could be used to make necessary adjustments to property lines, but the 40 acres do not qualify under that law. The United States cited this law to adjust property lines where parking lot construction encroached on national forest lands.

The district ranger also considered issuing a special use permit, allowing the United States to use the land for a fee, but the uses of the garden did not meet Forest Service policies.

The realignment of the Red Butte fence is something no one wants to see. But it may be the one selected by default if agencies can’t navigate the bureaucratic maze the federal government has created for land swaps.